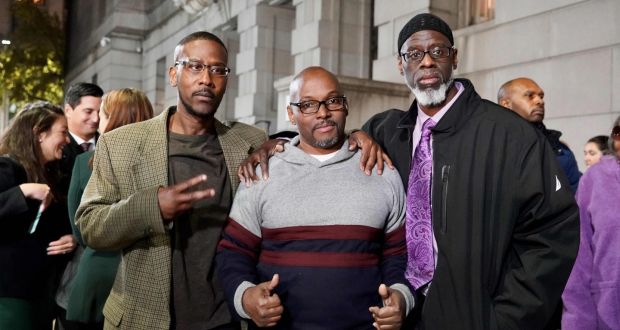 Alfred Chestnut, Andrew Stewart and Ransom Watkins pose for a photo after their release in Baltimore. The men, who spent 36 years in prison, were exonerated of the 1983 murder of a teenage boy who was shot dead over a jacket.

Reminiscent of 'When They See Us' and equally frustrating.

Three Black men from Baltimore walked into the arms of their families for the first time in 36 years without being surrounded by guards on Monday (Nov. 25) after being exonerated in a wrongful murder conviction. According to The Washington Post, Baltimore prosecutor’s Conviction Integrity Unit apologized to the men for the system failing them, despite sweeping four witness testimonies under the rug shortly after the incident took place in 1983.

DeWitt Duckett was 14 years old when he was shot and killed in the hallway of Harlem Park Junior High School for his Georgetown University Starter jacket. The teen was heading to lunch with friends and someone demanded his coat. Duckett was shot while struggling to remove the jacket from his body. He then ran to the cafeteria where he collapsed. Duckett was conscious at the time, but unable to speak. He died two hours later.

Police arrested three teens on Thanksgiving Day that year, and they were later convicted of murder and sentenced to life in prison.

Alfred Chestnut, Ransom Watkins, and Andrew Stewart are the names of the three Black men who had their freedom, youth, and innocence stripped away.

Prosecutors now admit that the case “encouraged false witness testimony and ignored evidence of another assailant.” Police reports produced shortly after the killing indicated that a number of witnesses told Baltimore investigators that a man named Michael Willis, then 18, was responsible for the murder of Duckett. “One student identified him immediately, one saw him run and discard a handgun as police pulled up to Harlem Park Junior High School, one heard him confess to the shooting, and one saw him wearing a Georgetown jacket that night,” The Washington Post reports.

However, police – including Donald Kincaid who was the lead detective in the case, opted to focus on Chestnut, Watkins, and Stewart instead. The three men, then teens at the time, admitted to skipping high school that day, as they were seen parlaying in the hallways and classrooms of Harlem Park. The teens were kicked out of the school at around 12:45 p.m. by a security guard. The guard testified at trial that after lecturing the teens, he watched them leave the school and locked the doors before the shooting took place at 1:15 p.m. Despite this knowledge, prosecutors at the time claimed that the three teens must have snuck back into the school. A Georgetown University jacket was allegedly later found in Chestnut’s bedroom.

‘The Post’ reports that defense attorneys in the case searched for evidence that would call into question their clients’ guilt. A year later, then-Assistant State’s Attorney Jonathan Shoup denied such accounts, despite there being proof stating otherwise. Per police reports that were eventually sealed by a judge, trial witnesses failed to identify the three defendants in photo lineups as well as statements connecting Willis to the crime on two occasions.

Kincaid was surprised by the news of the men being released. He also denied any wrongdoing connected to the Baltimore police’s investigation. “What would I get out of that? You think for one minute I want to send three young boys to prison for the rest of their life … I didn’t know those boys. I didn’t know them from Adam. Why would I want to do something like that?” he said.

The men’s freedom was a result of Chestnut’s unwavering efforts to bring attention to their case and force it to be reviewed once more. While the other two men may have lost hope, he continued to push for what he knew would allow him and his childhood friends to be reunited with their loved ones. In May, he sent a handwritten letter to City Prosecutor Marilyn Mosby’s office. He had just seen Mosby on television speaking of Baltimore’s Conviction Integrity Unit and its’ commitment to uncovering wrongful convictions.

Mosby, the head of Baltimore’s Conviction Integrity Unit and the person responsible for the three men walking to freedom, said that the case was flawed. She said the teen witnesses were often questioned without their parents present. Also, they felt coerced into falsely identify Chestnut, Watkins, and Stewart.

Mosby’s Conviction Integrity Unit worked in tandem with the Mid-Atlantic Innocence Project to acquire representation for the men.

She visited Chestnut, Watkins, and Stewart on Friday (Nov. 22) to share the news of her requesting their exoneration. “I’m sorry. The system failed them. They should have never had to see the inside of a jail cell. We will do everything in our power not only to release them, but to support them as they re-acclimate into society,” she told the men.

The main detectives in the case are no longer working within the justice system.

Willis – who according to ‘The Post,’ had a number of arrests on drug and assault charges after Duckett’s murder, was killed in West Baltimore at age 27.

“This is overwhelming,” said Chestnut as he stood beside his lawyers and family on the outside of the prison he was held in for 36 years. “I always dreamed of this. My mom, this is what she’s been holding on to forever. To see her son come home.”